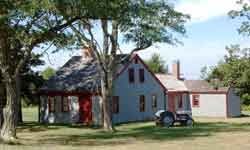 Whether you are a Cape Cod native, a recent wash-ashore or vacationing on the Cape, a visit to Taylor-Bray Farm is well worthwhile! The farm consists of approximately 22 acres bordering Chase Garden Creek and the Black Flats marsh and includes four fixed structures, including a  half Cape farmhouse, a barn, a caretaker’s cottage, and a small storage building. Start at the late 18th century Taylor farmhouse. The house was built by Samuel Taylor some time after he returned from service in the Revolutionary War. There are also animals including a Scottish Highland cow out in the pasture. Other  animals on the farm include sheep, cattle, goats, donkeys and chickens.

After you have seen the animals, walk out the boardwalk into Black Flats Marsh. This is largely what Richard and Ruth Taylor saw when they first established this isolated farm in 1639. The Chapin Beach dunes are to the west or left and beyond them, Cape Cod Bay. The Town of Dennis, once part of Yarmouth, is on the far side of the marsh. In the spring or summer, you may see osprey nesting on a platform in the marsh about 100 yards to the north of the boardwalk.

The farm is open seven days a week from dawn to dusk. There are picnic tables near the farmhouse.

“The Taylor Bray Farm is one of Cape Cod’s hidden gems . . . by at least 3,600 years [before the present time], Native people inhabited at least part of the property. Around 1640, European colonization that had begun in Plymouth in 1620, had spread to this portion of Cape Cod.” Craig Chartier, archaeologist.