So, You’re not a beach person. The meeting of land and sea, with all its sundry diversions; sunbathing, swimming, fishing, whale watching, what have you, hold for you no particular allure.  That’s cool. Come to Cape Cod.

Its no matter that the creative arts have never captured your fancy.  A thriving theatre community, vibrant live music scene and countless galleries of every description simply don’t figure in your plans. All right. Come to Cape Cod.

If you see shopping and dining as no more than necessary evils, where on Earth is the harm? A dizzying variety of shops and restaurants, catering to all conceivable tastes and budgets, frankly don’t figure in your recreational calendar. Fine. Come to Cape Cod.

You find physical exertion odious and who, I’d like to know, wouldn’t sympathize?  Cycling, camping and horseback riding, all amid breathtaking natural splendor, are pursuits you need never consider.  I know, don’t even get you started on golf.  Okay already. Come to Cape Cod.

Yes you, who have so prudently resisted giving your heart to those frivolous activities embraced by the common vacationer, can find on this island a sanctuary from any personal ennui and even the loathsome barrage of suggestions from associates rankled by your particular level of discernment.

No, my skeptical friend, the haven to which I refer is not a full-service spa, meditation center or psychiatric counseling office.  In fact, this refuge is as near as any of the ten charming ballparks that play host to the Cape Cod Baseball League, here every summer the national pastime is played at an exceptionally high level in idyllic surroundings. 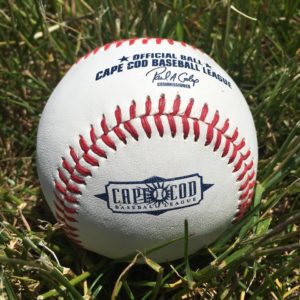 Perhaps first among the virtues of the Cape Cod League is the sheer talent of the athletes on display.  The teams are composed of elite players from the college ranks, whose skills are well reflected by the fact in 2016 a total of 297 Cape League Alumni appeared in the Major Leagues.  Among them, to name but a few, are superstars Kevin Judge, Buster Posey, and Chris Sale.  Recent Hall of Fame induction ceremonies have also been nicely represented by those with Cape League backgrounds when Jeff Bagwell, Craig Biggio and Frank Thomas were enshrined with the immortals on the game.  Many more are sure to follow them to Cooperstown in the years ahead.

Further adding to the appeal of the League is the basic element of cost. Admission, whether you sit behind Home Plate or beyond the deepest reaches of the outfield fence, is FREE.  The same goes for parking.  Actually, unless you want to support the League with a donation or by playing the famous “50/50 raffle” your wallet is quite superfluous at a Cape League game.  That said, it will come in handy if you decide to enrich your experience by partaking of the tempting assortment of edibles and souvenirs offered at each park.

Though I could continue to enumerate its readily definable attributes, what I find most compelling about the Cape Cod Baseball League is decidedly harder to quantify.  It’s in the way the towns of Bourne, Brewster, Chatham, Cotuit, Falmouth, Harwich, Hyannis, Orleans, Wareham (the only club located “off Cape”) and Yarmouth-Dennis embrace their teams. It’s in the way locals support individual players and the way those players respond in kind by helping to maintain the playing fields, making every effort to be accessible and integrating pleasantly with fans of all ages, but especially with kids, whose enthusiasm infuses the League with a palpable spirit. It’s in a purely unspoiled atmosphere where the joy of those attending and participating in games is equally evident and absolutely genuine.

Obviously, the sound of an expertly wielded wooden bat reverberating across a lovingly tended grass field can be heard in many different places but not in many college leagues where an average of one in seven players ascend to the Majors and fewer still that have been in existence for 132 years.  While I hope I’ve begun to sell you on its merits, to truly appreciate the Cape Cod Baseball League you must see it for yourself.  Do me a favor – Come to Cape Cod.